Want to Win at Foosball? Try These Tips!

Do you want to be the ultimate foosball champion? 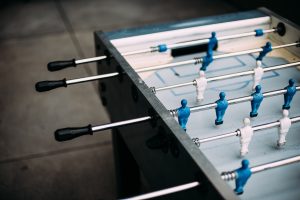 Take heed of these tips, and before you know it, you’ll have bested all your friends and maybe some of your friend’s friends as well.

Foosball is a well-known game that has been around for more than twenty years. Also known as fuzboll and table football, most people have played it at one time or another. Some people love it, while others don’t seem to have a knack for it. Regardless, you probably have memories of the game throughout your life.

Spinning is against the rules. In addition, if you try and do it, you will not improve in foosball very much. Some people believe that spinning will keep your opponent from winning; however, that is usually a beginner’s mistake. They also think that spinning lets them put up a stronger shot. This is not true. Spinning makes it difficult to control your players and puts everything up for grabs. There have been many players that have scored on themselves due to spinning because they weren’t able to control the direction of the ball.

Figure Out the Sideways Shunt

If the defender has positioned themselves right by your striker, what should your next move be? Most people get upset and just push the ball ahead. That is not a wise move because the ball could bounce off the other team and give them a favourable advantage. A backpass is also not the best move. However, if you push the ball to a player beside you, you can catch the opponent off-guard. This is also a good idea to try if your player in the back is having trouble moving the ball past the other team’s forward.

Make Your Goalkeeper Work For You

Recognise that Hostile Elements are Possible

Most players are not going to be the ultimate champion. This is important to realise and accept. Therefore, many people play in homes, with their friends and family members. The tables themselves are not always cared for the best. Children, for example, can cause problems for a table. You may not have such issues at your home, especially if you have the Bonzini foosball table, but it is important to recognise that other tables won’t be the same as yours. You have to be good even when the ball is half destroyed and the players don’t turn properly. Your ability to do well in these situations is key; you have to adapt and adjust to whatever situation you are dealing with.

Figure Out the Dummy

This is a lot like a dummy that you might come across in real life, but you need to have a bit more skill and grace. First, you have to look as though you are going to take a shot. Rotate your wrists so that it is convincing, and the other player is fooled. However, do not go through with it all the way. Just as your player is about to strike the ball, switch and pass it to the side. Your strike partner is then likely open to deposit the ball into the net. This is a great strategy that will help you score a goal when you need it the most. You can catch your opponent off-guard and give yourself the advantage.